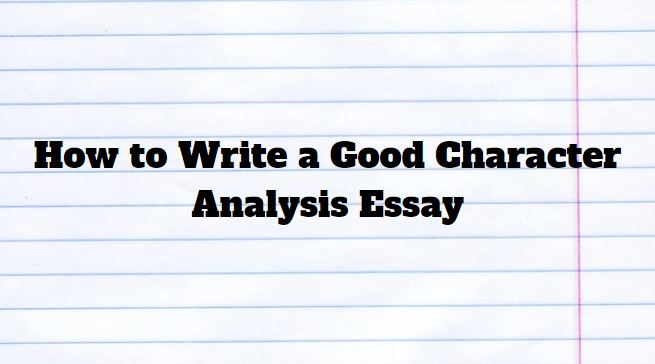 Writing in high schools or colleges is one endless activity. And while it may be hectic and frustrating for some, to others, it is a sweet experience because essays provide opportunities for students to show their creativity.

A character analysis essay is one of the most essay types you will probably write, depending on your course. These pieces explain and expound on the characters in plays, cinemas, or other literary forms, but they all follow a similar pattern.

And if you’re looking for a guide to help you write your essay, look no further. I’ll walk you through some simple steps to write a character analysis essay.

Tips on How to Write a Good Character Analysis Essay

Writing a character analysis essay is much more than just describing a character. You must look at how that character’s actions affect the story and what it means for them.

Here are some tips on how to write a good character analysis essay.

Before you start writing a character analysis, you must read the story from beginning to end. This will help you understand the characters better and give your essay more credibility and structure.

Further, it helps you get an overall idea of what’s going on in the book or movie so that you know how much information is available about each character before writing your essay.

And even if you have ever read the story, reading it a subsequent time is still encouraged. This is because it helps you focus your mind on the characters, setting, or plot development. Generally, ensure you’re familiar with every detail of a character before beginning your essay.

An effective character analysis essay goes deep into detailing a specific character. And depending on your essay length, character choice will play a significant role.

If your professor requires a large word count, protagonists or antagonists are the best characters to choose from rather than minor characters. This is because the main characters have more details than the others.

However, you do not have to go for the protagonist. Instead, go for a dynamic character who undergoes several changes because it gives you more meat to write on.

Now that you have a clear idea of your story and what kind of character you’re writing about, it’s time to start thinking about how this character will move through space and time.

Further rereading the story with this character in mind helps you focus on them alone. Some of the questions to ask yourself in this stage include;

As you read the story, take notes of important themes. The main theme is the story’s central idea and usually involves a problem or conflict that characters face and often resolves itself by the end of the story.

In addition, the central theme plays throughout all three acts of a play or novel, but they’re usually more apparent in Act 1 than in Acts 2 and 3 because those later acts mainly deal with plot complications and resolutions.

Your paper consists of an introduction, body, and conclusion. The opening is a concise brief of the character in question and leads the reader to gain interest in reading the piece. On the other hand, the body has several sections, but it is a good idea to follow your instructor’s guidelines. At the same time, the conclusion ties everything together and summarizes your entire paper.

How Do You Analyze Characters in an Essay

Generally, analyzing a character entails identifying, determining their role, and understanding their actions. Further, you must explore their relationships with others, identify their traits, and finally identify how they evolve through the book or play.

These are six primary ways of analyzing characters in an essay. Let’s now look at each in detail.

This is a significant step, and you should classify your character as static or dynamic. Additionally, you should identify if they are primary or secondary characters.

After identifying the character, you should move to determine their role. If you go for the main character, it means their part is to bring out the theme, while the secondary characters’ role is to support the achievement of the theme.

Next is to identify the mentioned character roles. Some aspects to help you include why the characters are antagonists or protagonists, their first actions in the story, and how they influence the story.

This entails how the identified character relates with others and the significance of these relationships in the story.

Traits of the character emanate from their actions and relationships. They may include bravery, self-centeredness, or generosity.

How to Write a Thesis Statement for a Character Analysis Essay

Writing a thesis statement for a character analysis essay entails four major steps. These are drawing a rough sketch of the characters, their main traits, role, and functions, and summing all these points into one sentence.

For your statement to be effective, it must include all four mentioned parts. The first part describes the character’s appearance, actions, values, beliefs, and tendencies. It then comprises their relationship, role, and functions.

After having all these parts, it is time to sum them into one sentence.

How to Write the Introduction of a Character Analysis Essay

Writing the introduction of a character analysis essay is probably the most important because it determines if a reader will continue reading the paper or not. As such, following these steps will help you write the best introduction.

Quotes are one of the best ways to start an introduction. However, ensure they are related to the character’s trait. For example, if the character is generous, use a quote about generosity.

Next is presenting the literature information. This is where you identify the character’s name, author, and title.

Your introduction should then introduce the character being analyzed. Some of the information included here include their role, whether they are protagonist, antagonist, static, or dynamic.

Further, you should have a few lines giving a general look and description of this character.

This part of the introduction is the transition between the character description and the thesis statement. It also entails the central theme of the piece of literature being analyzed.

This is the last part of your introduction. It includes your fundamental assertion and thus should be clear. You can also highlight what you will cover in your body paragraphs.

How to Write the Body Paragraphs of a Character Analysis Essay

The body of a character analysis essay is also a significant part because it gives more details about the character. Each paragraph has a topic sentence and specific examples supporting the sentence. In addition, the topic sentence supports your thesis statement.

If possible, include quotations from the text and paraphrases of what other people have said about the character in question.

As you write this section, some of the must-answer questions include the following;

How to Write the Conclusion of Character Analysis Essay

This is the last part and involves three major areas; stating a summary of the entire essay, your opinions, and your thoughts and predictions. You can also note how the character is relevant in real-life situations.

Also see: How long should a conclusion be in an essay?

Also, this is where you will elaborate on those points and explain why they are relevant to your topic. Any quotes from the source material that shows how well you understand the material being studied should also be included in this paragraph.

Further, the conclusion concludes the character’s role in the story, how they changed over time or why they were essential to the plot. You could also expand on other characters and how they relate to your character of choice.

Generally, your conclusion should have the following;