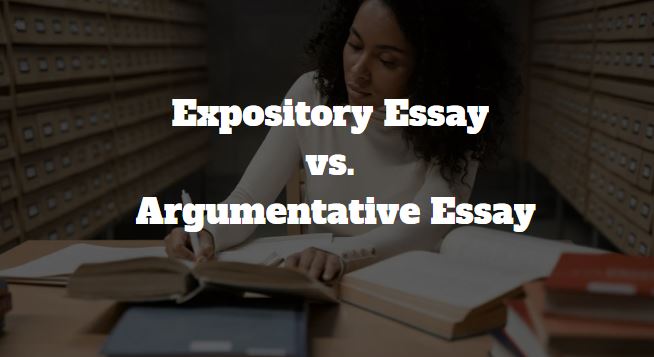 Expository and argumentative essays involve research, strong thesis statements, factual body paragraphs, and well-thought-out conclusions. And when asked to write an expository essay, the key is to thoroughly understand the topic and research to inform the readers of new information.

But while the two writing pieces are similar in the work that creates them, they differ extensively in many other aspects. Their differences are diverse, and without proper scrutiny, it is possible not to tell these essays apart.

Conversely, expository essays provide coherent information and explanations about a specific issue. On the other hand, argumentative essays aim to convince readers the writer’s point of view is correct and for them to agree with you.

The definitions provide a clear path for their distinction such that you can easily tell them apart. But overall, the main difference can be seen in their names. One exposes an issue, while the other provides for an adoption of a specific position.

Let us now look at the expository essay vs. argumentative essay analysis to help you understand them better.

What Is an Expository Essay?

An expository essay is a type of writing that explains, describes, or illustrates something. It is not a persuasive essay and does not have a specific purpose other than to explain something in detail. It’s not a research paper, although it requires some research, and the information generated gives the reader information on a particular topic.

These essays can be written about anything from the history of your town to how to bake bread. They are used in many academic disciplines, including science, business, and social sciences. Their purpose is to inform the reader about something rather than persuade them to do something.

In addition, an expository essay provides facts and evidence rather than opinion or conjecture. It should also be objective and neutral rather than subjective in its approach. Despite these essays aiming to educate readers, they also offer an opportunity for a writer to show their subject mastery. However, as mentioned, you should not show bias in the information you portray.

This essay type involves defining a concept through facts and figures.

They describe a step-by-step guide on how to do something or a particular procedure.

are those describing things in a category.

These essays show how and why something occurs due to a previous action.

What Is an Argumentative Essay?

An argumentative essay is a kind of academic writing that requires an author to develop a position on a specific topic. This type of paper aims to convince the reader that your point of view is correct based on your provided evidence.

Ideally, you take a side and defend it by presenting evidence. The most important thing about an argumentative essay is that it is not just a story or narrative but an explanation of why you believe certain things. It is also not merely stating your opinion but proving your point with facts and evidence.

Also see: How Do You Write a Toulmin Argumentative Essay

Additionally, an argumentative essay should be clear and concise. It should also be organized logically and clearly with an introduction, body paragraphs, and conclusion. The introduction states the main idea of the essay as well as gives some background information related to the topic being discussed.

The body paragraphs explain why you believe your thesis statement to be accurate, using evidence from your research sources. Each paragraph should have its topic sentence that clearly states what you are trying to prove with each paragraph.

Similarly, the final paragraph should summarize your points and restate your thesis statement to leave your reader with a lasting impression of what you have said throughout the essay.

These essays have three main ways to write them;

What is the Difference Between Expository and Argumentative Essays?

An expository essay is a writing piece that explains some idea or concept. It is not an opinion piece but rather a piece that presents information clearly and concisely. For example, if you were to write about the history of Western culture, your goal would be to give information about this topic without bias or prejudice.

On the other hand, an argumentative essay presents its point of view on a particular topic. It does not present facts but offers opinions on how things should be done by giving evidence supporting their position.

For instance, if asked to write about whether or not children should be allowed to play football, you would write about why it is good for them or bad for them based on your beliefs and research.

In contrast, the purpose of an argumentative essay is to prove why you’re right. For example, if there is an article describing cats as better pets than dogs, you could write an argumentative essay about why dogs are better than cats. Your goal would be to convince your reader that dogs are better than cats as pets by using evidence from personal experience and research findings.

Thesis statements are the backbone of an essay and offer a clear direction for the rest of your paper. It also helps you to organize your thoughts and decide what points to include in the body paragraphs.

An expository essay’s thesis statement introduces the topic broadly and generally but specifically to serve as a starting point for further research. For example, an expository essay on the history of the automobile industry could begin with a broad statement like “The automobile industry has changed significantly over time.” This statement allows you to explore many aspects of car manufacturing, including technological changes, manufacturing processes, and marketing strategies.

On the other hand, an argumentative essay’s thesis statement comes in the form of stating your argument. It gives your readers a clear idea about which side of an issue you will take and how you will argue for that position. For example, if you are writing about whether or not gun control laws should be stricter, your thesis might look like this, “Gun control laws should be stricter because they help prevent crime.”

In an expository essay, a writer explains a concept or idea in detail, providing evidence and examples to support the position taken. An argumentative essay, on the other hand, presents an opinion or position on a topic and supports it with evidence and reasoning.

With these different purposes, their viewpoints are also different. Expository essays typically use a third-person point of view (he/she) because they are factual and objective rather than personal. Argumentative essays often use the first-person point of view (I) because they are personal interpretations of events or issues rather than objective descriptions.

Further, expository essays are usually non-biased because the writer neutrally provides information without any emotional attachment aiming to inform or explain.

On the other hand, argumentative essays try to persuade the readers about their point of view by using facts and logical reasoning. Thus they are biased and subjective.

The opening line of an expository essay is a general statement about your topic and presents your case. For example, if you’re writing about the history of baseball, you might write: “Baseball has been played in America since the nineteenth century.”

On the other hand, the opening line in an argumentative essay introduces your topic. For example, if you’re writing about whether or not schools should have dress codes for male students who wear athletic shorts and tank tops, your first sentence might be, “Dress codes are necessary to ensure school safety.”

An argumentative essay also uses logical, emotional, and ethical appeals. These appeal to logic, emotion, and ethics to persuade readers that your position is correct. On the other hand, an expository is devoid of such appeals.

The two essays differ in judgment emanating from their purposes. An expository essay does not give any decision because it aims to inform. But an argumentative ends by challenging or asking readers to agree with the writer’s position based on the reasons given.

In a nutshell, an expository essay summarizes the information provided by a factual source or source material. An argumentative essay, on the other hand, bases its claims on evidence and asserts the truth value of that position. It is worth noting here, though, that both essays rely on facts to prove the point the writer wants to make.

And with that, we know you can now clearly differentiate between the two essays.